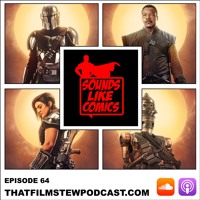 That Film Stew Podcast
If you were still looking for a reason to get Disney+, is the answer The Mandalorian?

Set five years after the events of Return of the Jedi and twenty-five years prior to the events of The Force Awakens, a lone gunfighter, the Mandalorian (Pedro Pascal) makes his way through the outer reaches of the galaxy, far from the authority of the New Republic.

This episode will include spoilers for Star Wars: The Rise of Skywalker.
Genre :
Entertainment

That Film Stew Podcast .
The track duration is 14:51.
The soundcloud track was commented 1 times and was played 133 times, with 1 favorites.