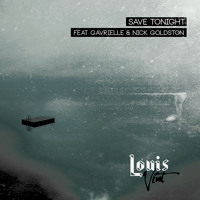 Insomniac Discovery Project winning duo Louis Vivet is following up their Escape From Wonderland performance with the release of their debut single, featuring vocals from Gavrielle and Nick Goldston. This cover of the 90’s smash hit is released on November 25th, in anticipation of the duo’s forthcoming EP on Prep School Recordings.

“We decided to cover this song because we thought it was something that fans would connect with. A lot of the stuff coming out these days doesn’t have that emotional component that really resonates with fans. We wanted to create a song that seems happy but underneath, there’s an underlying sadness...we enjoy creating art that carries with two different meanings. And when we first linked up with Gavrielle (via YouTube, funny enough) we started talking about our favorite childhood songs, and we all universally named ‘Save Tonight’ by Eagle Eye Cherry. So we decided to give it a modern re-interpretation and infuse it with different elements from our favorite producers like Kygo, EDX, and Christian Karlsson of Galantis.”
- Louis Vivet