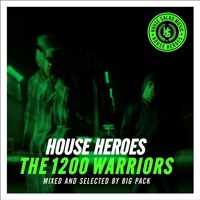 1200 Warriors is made up of DJ Choco AKA G-dubs & DJ Junior Rivero. After 15+ years of friendship and a couple of collaboration projects. These two are teaming up to bring you 1200 WARRIORS. With influences from the streets of Washington Heights in New York City and straight from their ethnic roots. They bring a new era of music. A mixture of music borrowing from dance to the opposite end of the spectrum hip hop and everything in between.Never the less, these two also have there solo career's as DJ's, Remixers and Producers.

For many years Choco has been the chief engineer for the WU-TANG CLAN and RZA. As well as having success house hits as "New Day" on 4th Floor Records and 95 south's "Sunday Shouting "b-boy shouting remix. Rivero started out as a local DJ, which got him into editing, remixing and producing behind the scenes. Now he's been dragged into the forefront to make things official and bring you The 1200 Warriors. In 2004 Defected Records picked up one of there tracks titled "Gangsta House" feat the legend KRS-ONE, which was featured on the Jazzy Jeff Compilation.


Since then these two are making there mark with releases and remixes on Aroma Records, Defected Records , Detour Recordings, Code Red Recordings, 4kenzo Recordings ,Greenskeepers Music , Flatpack Traxx ,Guesthouse Recordings, Ministry Of Sound, Moist Music compilations,Pastada Records, Jack The System , And the list keeps on growing. In 2007 they started there own label 1200 TRAXX which is a digital only label (For now). Some of there releases include "At Last", "Jazzo", "Bonafied" Feat Craig Mitchell, "Roder Ruder" Feat Michelle Weeks," Loose Control" Feat The Wu-Tang Clan" which is off there debut album "Live From NY" which is out now. It has collaborations with Michelle Weeks, Ky-Mani Marley, Craig Mitchell , KRS-ONE and The Wu-Tang Clan It also has the usual tracks with the1200 sound they are known for. 1200 Traxx will be releasing their own music as well as other artist These 2 Guys are definitely creeping up fast. Their music is being played everywhere. If it says 1200 on it, you know who it is.

This tribute was selected and mixed by Big Pack
@soundcloud.com/bigpack

House Salad Music .
The track duration is 01:49.
The soundcloud track was commented 21 times and was played 2099 times, with 148 favorites.