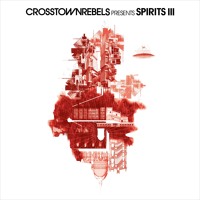 The world-renowned Crosstown Rebels add the third instalment to their annual Spirits compilation, an album which has become established for delivering some of the biggest hits that have been heard in Damian Lazarus’ sets over the past year, from some of the most esteemed artists in electronic music. Let your mind become absorbed in this collection of diverse and exciting tracks.

The man himself Damian Lazarus opens the release, setting the tone with the haunting hypnosis of Ergot which contains snippets of an ancient Chilean revolution song, relevant to the current political climate. Next up Guti & Fosky collaborate once again in fine style to produce a smoky, late-night atmosphere, with the moody bassline and expertly crafted beat of Da Drumz. Side B and legendary producer Martin Buttrich combines driving tripped out rhythms with warm surging pads, creating a great musical tonic during Slow Down. Denney & James Dexter then deliver a peak time monster in the form of Transcend.

Next up Harry Romero adds a touch of romance on It’s You with an unravelling rhythm of heartfelt synth. Dennis Cruz’s Mother Earth follows up with striking vocals playing off one another with soaring brass and strings. More DJ ammunition is provided by Piem on Freak Out where a familiar looped sample is manipulated to ignite dance floor euphoria. Finally the bounce of Adonis Rivera’s XX Acid will have you hooked from the outset, as you would expect from the title, razor-sharp acid awakens every sense in this heady piece. Another great Spirits compilation to add to the esteemed series.
Genre :
House

Crosstown Rebels .
The track duration is 43:53.
The soundcloud track was commented 13 times and was played 11015 times, with 515 favorites.