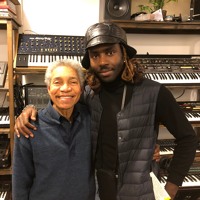 Talkhouse
Devonté Hynes, aka Blood Orange, had an incredible 2019. He dropped the mixtape Angel's Pulse; scored the critically acclaimed film Queen and Slim; released a classical album with Third Coast Percussion; directed a music video for Beck; and, as a fan, finally saw the brilliant composer/vocalist Beverly Glenn-Copeland live. Glenn-Copeland (as he prefers to go by in his day-to-day life) had his own amazing year: At the age of 74, he had his first international tour, released the new LP Primal Prayer, and saw his previously obscure, decade-spanning seven album catalog finally embraced in music communities around the world. And he met Dev, whose music he adores.

We introduced Dev and Glenn right here on the Talkhouse Podcast, and the ensuing convo was warm, vulnerable, funny, and potent. The two sat on a sofa at Hook and Fade Studio in Brooklyn, and instantly formed a world all their own; they stared into each other's eyes, and spoke so softly that it was difficult to hear them from even a few feet away. In their wide-ranging conversation, Glenn and Dev discuss discovering parts of themselves by traveling out of their home countries; the way they each approach their songwriting; and the story behind Glenn’s seminal 1986 album Keyboard Fantasies. We also learn the importance of nature and its role in their music; how recently Dev began to honor music as the foundation of all his creativity; and the trick Glenn’s mother used to make him a musician while still in utero.

The Talkhouse Podcast’s theme song was composed and performed by The Range.

Talkhouse .
The track duration is 44:57.
The soundcloud track was commented times and was played times, with favorites.